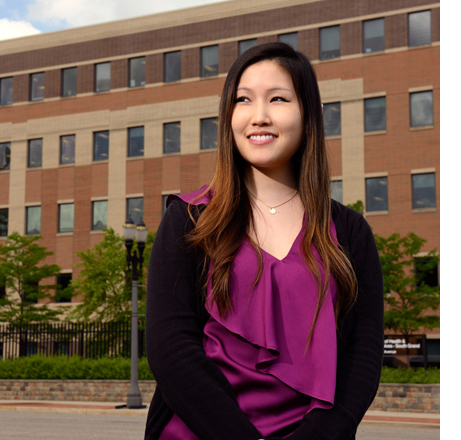 Sue Kim works as an influenza data analyst for the Michigan Department of Health and Human Services. She is responsible for tracking population-based rates of hospitalization due to severe influenza-related illness across five counties in Michigan.

Influenza-related statistics such as these are an integral part of the job for Sue Kim, Spartan in Public Health and influenza data analyst with the Michigan Department of Health and Human Services (MDHHS) communicable disease division. Her work focuses on the Influenza Hospitalization Surveillance Project (IHSP), which annually provides population-based rates of hospitalization due to severe influenza-related illness from Oct 1 to April 30 across five counties in Michigan.

“I was interested in communicable diseases in general—that’s what drew me to the position,” said Kim, who has held the job since 2017. “I have a lot of experience working with large and small data sets, based on my research lab work at Michigan State University. This job seemed like a great fit for me.”

MSU Undergraduate Experience and Lyme Disease
Kim began volunteering in the College of Agriculture and Natural Resources with associate professor Jean Tsao’s Disease Ecology Laboratory while working on her bachelor’s degree in zoology, and ecology, evolution and organismal biology. As an undergraduate, she said she felt she needed to do something outside of coursework, something specific to what she was interested in. While exploring some of the work going on in labs across campus, she noticed Tsao’s work with Lyme disease—a field that Kim was interested in and wanted to learn more about. She started as a volunteer and then began contributing to the research during her four years in the lab.

“It was a great hands-on experience,” she said.

After earning her B.S. in 2015, Kim planned to apply for admission to MSU’s College of Veterinary Medicine. She was also a volunteer veterinary assistant at the Ingham County Animal Control and Shelter, preparing shelter animals for spay and neuter surgeries.

When Kim took part in a summer internship program designed to prepare undergraduates for vet school and veterinary medicine, she heard a panel of vet students describe MSU’s Master of Public Health (MPH) program and how it helped them develop in their careers. She decided to shift her career focus.

“I was intrigued. I realized how much I could do with an MPH degree,” Kim said.

Her MPH capstone work focused on sexually transmitted infection rates in Barry versus Eaton county. She also spent five months with the Barry-Eaton District Health Department as a planning, promotion, and evaluation intern in the area of communicable diseases.

“That experience was just what I needed to understand what the professional aspect of public health was all about,” she said. “It was a great introduction to going on to the state-wide level in the public health field.”

Kim graduated with her master of public health degree in 2017, along with a certificate in food safety and toxicology.

In her position with the MDHHS communicable disease division, Kim works directly with the respiratory disease epidemiologist; manages the influenza and non-influenza respiratory disease database; participates in state-level preparedness activities for responding to respiratory outbreaks; directs weekly database transmission to the CDC; and serves as editor of the Michigan Flu Focus, a weekly report.

“What drew me to pursue public health was its focus on prevention—through monitoring, preparing, and promotion. I enjoy working with data, and it seemed like a perfect fit with my interests and experiences,” Kim said.

Her long-term goal is to become an epidemiologist.