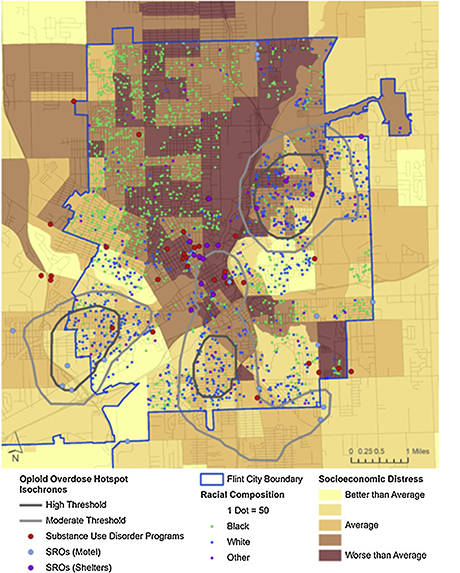 The U.S. opioid epidemic is pronounced in low-income areas and where people lack health care services, which includes cities in Michigan and across the Rust Belt. Public health researchers set out to determine if opioid overdose deaths occur in patterns in Flint.

The U.S. opioid epidemic is still raging – it’s particularly pronounced in low-income areas and in those where people lack access to health care services, which includes cities in Michigan and across the Rust Belt. But the effectiveness of efforts to provide treatment and recovery options to those who need it most – that is, in locations with the greatest number of deaths from opioid overdose – has been unclear.

Debra Furr-Holden, associate dean for public health integration, and Richard Sadler, assistant professor, both in the College of Human Medicine’s Division of Public Health, set out to determine whether opioid overdose deaths occurred in patterns in Flint, a city that’s dealt with significant tensions and public health crises in recent years, including the Flint water crisis and a high rate of opioid overdose deaths.

Sadler mapped the distribution of opioid overdose deaths, pulling data from the Genesee County 911 Consortium, from 2013 to 2015. He also looked at whether neighborhood-level conditions – like race and socioeconomics – were related to the overdose locations. Finally, he analyzed the distribution of 47 opioid treatment sites to determine whether it corresponded to the highest-density of deaths.

The data revealed three geographic clusters with the highest concentration of opioid overdose deaths in Flint. The three neighborhoods tended to be poorer, have more white rather than black residents and had experienced economic downturn over the years.

“These three neighborhoods were distinctive from other neighborhoods in the county, but similar to each other,” Sadler said. “The key characteristics were that they were the poorest, predominantly white neighborhoods and they experienced a major decline in the last 20 to 30 years. This is seen in the rate of increased vacant housing, declining median income and declining population density.”

Sadler adds that he himself grew up in one of the three clusters, an area that in his childhood was a nice, regular Flint neighborhood.

“I have memories of it being a pretty cool neighborhood,” he said. “Now it’s quite different – many vacant lots and public health challenges.”

Another key finding in the study was that the treatment centers did not, by and large, correspond to areas of the greatest density of deaths. Of the 47 centers included, only one fell within a “high threshold” cluster (that is, the center of an area of the highest concentration of opioid overdose deaths), and seven fell within a moderate intensity cluster (a ring of slightly lower concentration just outside the center). These eight centers together accounted for only 17% of the total.

For Sadler, an urban geographer by training, one of the most interesting elements of the study is the mapping method. He points out that any city interested in seeing how its opioid overdose deaths are distributed, especially relative to existing treatment centers, can do so with this type of mapping.

The policy implications that can come from this deeper insight into opioid overdose vs. treatment availability is really where the potential lies. Knowing the exact locations where the greatest need for resources exists could strongly inform how treatment and prevention options are developed and disseminated.

“Integrating data-informed approaches with geospatial mapping can help cities optimize geographic placement of needed behavioral health services like medication-assisted treatment programs, naloxone distribution, peer recovery coaches, and referral services,” Furr-Holden said. “Cities need the most robust tools available to keep a pulse on where the needs are in order to implement the most effective prevention and intervention strategies. In Flint, the map shows that most of the clinics are downtown. The logic for this is clear, but these may not actually be the most effective locations. The data and geographic distribution of need certainly gives reason to consider other strategies, like satellite sites and mobile treatment centers.”

This research was funded by the National Institute on Minority Health and Health Disparities.